Flag Football Anyone? Getting the Whole Family Involved

Home / Uncategorized / Flag Football Anyone? Getting the Whole Family Involved

Flag football is a big deal in intramurals and recreational leagues. But for the family, tucking some tube socks into waistbands and getting out the old football is the way to play. 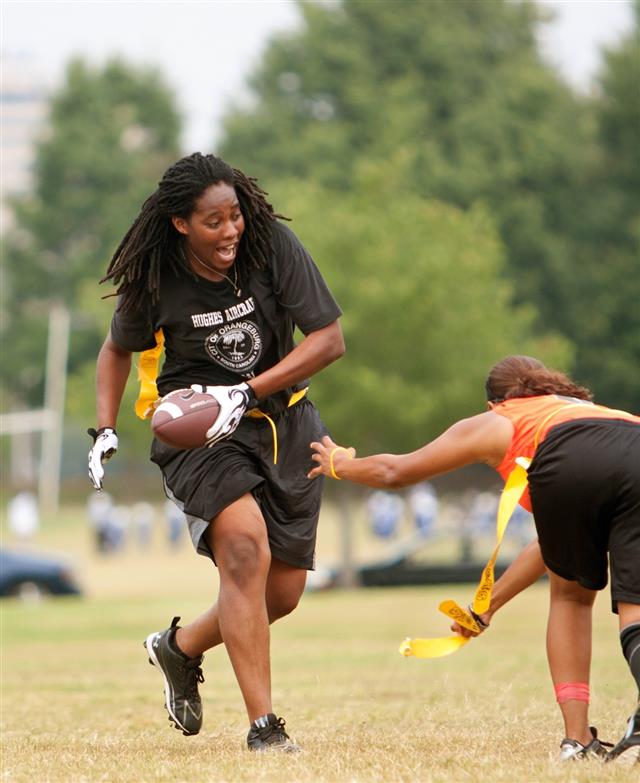 When Autumn rolls around and the weekend comes, those of a more relaxed nature may eschew such outdoor activities as raking leaves and chopping firewood, and instead turn to recreational activities. For family gatherings or just good weekend family fun, there’s nothing quite so American as tossing around the old pigskin and engaging in a game of touch football. Hearkening back to the national obsession with the Kennedy family during the 1960s, during which the family famously played a game of touch football on the front lawn of their estate every Thanksgiving, such friendly, non-contact pickup games have grown evermore popular as a way for the active and close-knit family to bond even further.

Now, not all of us are fortunate enough to have the sprawling lawn that the Kennedy family had, nor the mansion to retire to afterward for a Thanksgiving dinner prepared by servants. Nonetheless, going out to toss the football around with the family has received an upgrade since the days of the Kennedy Thanksgiving Day tradition. Namely, the game of ‘touch’ football has evolved―for some at least―to become ‘flag’ football.

This evolution was undoubtedly the result of some group of athletes who wanted a game that more closely resembled ‘tackle’ football, but that removed all or most of the hard hitting that defines the professional and collegiate game (not to mention high school and recreational leagues). For anyone who has engaged in a game of ‘two hand touch’ football, you have undoubtedly been faced with the age-old question surrounding that game. Namely―did he really touch me with two hands, or was it just one? A technicality, to be sure, but with a name that actually includes ‘two hand’, it is a detail not to be overlooked. After the one billionth argument over the nature of the ‘touch’ that is to substitute for a tackle, some enterprising individuals came up with the idea of flag football, which leaves no doubt about whether a player has been ‘tackled’ or not.

Flag football, you see, utilizes some form of equipment, attached to each player, that can be pulled off, thereby indicating that the player has been ‘downed’ or ‘tackled’. In the most official games played―intramural and high-stakes recreational games―these are often belts that have multiple flags attached with Velcro. For each player thus equipped, the effort to remove the flag is exactly equal, and if all the flags on the belt are attached (there are typically two or three flags on a belt), the player is down.

While such flag belts are a good idea for more formal games of flag football, the default ‘flag’ among families engaging in the sport are simply long socks (tube socks if you have them) that are then tucked into both sides of the waistband of shorts, sweatpants, etc. When the ‘flag’ (sock) is pulled from the waistband, the player is said to be down, or ‘tackled’. The result, for family game play, is the removal of doubt without any real investment in special equipment. And while the ‘official’ flag football games that are played in intramural and recreational leagues have many rules, family fun dictates that the rules can be made up ‘on the fly’. Uneven numbers of players, unusual playing conditions, the presence of children or the elderly, and any other number of circumstances can be adjusted to easily, while still taking that game of family football to the next level.