Aluminum Bats Vs. Wooden Bats: Find Out Which One is Better

Home / Uncategorized / Aluminum Bats Vs. Wooden Bats: Find Out Which One is Better

Which is better, an aluminum bat or a wooden bat? Join us as we try to find the answer to this question which haunts all baseball enthusiasts.

Records suggest that baseball was first played sometime in the mid-18th century. Since then, this sport has come a long way to become one of the most popular team sport in the world. During this phase, the world also witnessed several changes in various aspects of this sport, most of which just made it better.

One such change was the replacement of traditional wooden bats with new aluminum bats. Not everybody was happy with this change though, and that, in turn, triggered a debate as to which is better among the two―the aluminum baseball bat or its wooden predecessor?

The baseball bat is a club made from wood or metal, which is used to strike the baseball to score runs. According to the rules constituted by the International Baseball Federation (IBAF), it should not be more than 42 inches in length and 2.75 inches in diameter at the thickest point. Similarly, this bat shouldn’t weigh more than 33 ounces. The history of baseball bats can be traced back to the times when crude wooden bats were made by hand. As these bats were prone to breaking, manufacturers started manufacturing metal alloy bats, which were pitched to be much more durable. As time elapsed, more alterations were made to the design of the bat. The manufacturers introduced aluminum bats in the market as bats with a wider sweet spot and more power, which, in turn, resulted in better performance.

Many renowned players resorted to bats made from aluminum, while others stayed with wooden bats. As the manufacturers continue to make bats from wood and metal even today, the end users seem to be in a dilemma as to which of these bats are more efficient. Among the various differences in these two, the two most prominent ones are: safety and speed.

The sweet spot on the baseball bat determines the maximum force and velocity it can produce. Both, aluminum and wooden bats have a sweet spot, but the sweet spot of the metal alloy bat is larger than that of its wooden counterpart. Owing to this, the ball comes off the bat with tremendous ease and the force generated can make the ball go farther than the maximum range of a wooden bat. The balance point and weight play a crucial role in determining the power; aluminum bat scores high on both the aspects. Its weight is distributed evenly and it is lighter (as it is made from alloy), which makes it easy for the player to swing it at the ball. If the player is able to swing the wooden bat as swiftly as he swings the one made of aluminum, he can hit the ball even farther. That, however, is difficult, as bats made from wood are heavier than alloy bats.

Baseball bats made from aluminum have lately come under the scanner for a wide range of safety concerns. Their use has increased the number of injuries on the field owing to the high velocity at which the ball travels. The standard exit velocity of an aluminum bat far exceeds that of a wooden bat. Studies have revealed that the pitcher is at the most risk, as he has less reaction time. Skull fractures and jaw fractures have become much more common after their introduction on the field.

Other than these differences, one also needs to note that the aluminum bats are lighter than wooden bats. Similarly, the ones made of wood don’t vibrate as much as an aluminum baseball bats do.

Which baseball bat you use is just one of the many underlying factors behind your performance. There are other crucial factors which determine the performance of the player; the prominent ones among which are the style of the player, the way he swings the bat, etc. Thus, we can conclude that the wooden bat has more power, but aluminum bat is easier to use. In the end, the performance depends on the player himself, and not the baseball equipment. 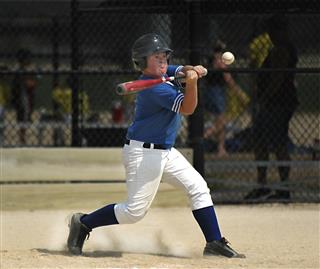 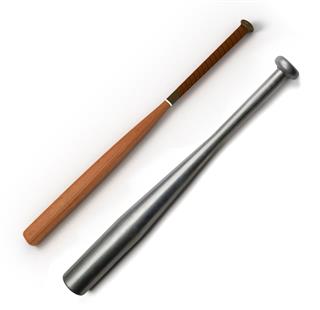