Best Soccer Players in the World

Every player in this article can be listed as the best soccer player in the world. Take a look at some of the best for whom soccer is the only thing that they live for, which means that the sport is their life.

Every player in this article can be listed as the best soccer player in the world. Take a look at some of the best for whom soccer is the only thing that they live for, which means that the sport is their life.

The rules of soccer are very simple, basically it is this: if it moves, kick it. If it doesn’t move, kick it until it does.
~ Phil Woosnam 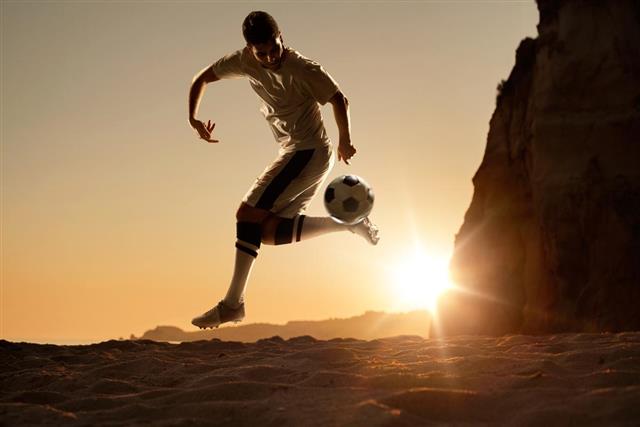 Talent is not the only thing that drives these players towards their dream. But their dedication, willpower and honesty is what makes them stand out. You need many qualities to play soccer, like presence of mind, speed, strength and stamina, and lastly scoring goals.

You need only one thing and that is the love for the game, and all the above mentioned qualities will follow. This is what these players have and this is what has driven them towards their dreams. Pick your favorite from the following great names:

Pele is a legend. He was 17 years old when he scored 6 goals in the 1958 World Cup and won his national team, Brazil its first title. He started playing at the age of 15 and played for Santos for quite some time. He started playing international matches at the age of 16 and became the star of the 1958 World Cup. One of the most famous player from Brazil, Pele too suffered his share of injuries and breakdowns, but made a glorious comeback to win his team another World Cup in 1970.

He played for Argentina, and is one of the greatest footballer the world has ever witnessed. Diego led his team to win the 1986 World Cup title, which earned him the World Player of the Year award. His talents knew no bounds as he started at the age of 15 and scored amazing 43 goals in 45 matches while playing for Argentinos Juniors. He stepped into the international team at 16, but later played in the World Cup. Though Diego Maradona was known to be one of the controversial footballers with drug abuse and scandals following him, he will always be remembered for his single handed victory in the 1986 World Cup against the English.

Best known as simply Ronaldo, he was once known to be the best soccer player in the world. He was born in the slums of Rio in the year 1976. Ronaldo made his early debut with the nation team of Brazil and was known to be the most talented dribblers in the history of soccer. When he started playing, before he was 20, he made his team proud by helping them bag the second place in their 1998 first division title. He was then picked up by FC Barcelona and later by Inter, where he was severely injured. His 2002 comeback with Real Madrid was a great surprise for all his fans and they truly enjoyed to see him play.

Born in Marseilles, France, Zinedine Zidane got recruited at the age of 16 by Cannes because of his extraordinary talent. He was then transferred to Bordeaux, where he made his mark in Europe. He was then picked up by Juventus. He played as a dominating midfielder for Real Madrid and won a record $66 million contract. Zinedine then played for the French national squad and won the biggest tournaments in soccer: the 1998 World Cup and the 2000 European Championship.

Apart from the names mentioned above, there are many famous players today, who also have great stories attached to their names. Listing all of them is not easy as each one them has his individual credits, but to name a few, is an honor. So here are the names of players who have earned their names in this wonderful game of passion.

With these familiar names in the soccer world, we leave it up to you to decide who among these is the best player. Take your pick as each one is them has made a mark on the soccer field.