The man, the legend, Michael Phelps, needs no introduction. Here's a look at the life of the most decorated Olympian ever and his MANY achievements over the years. 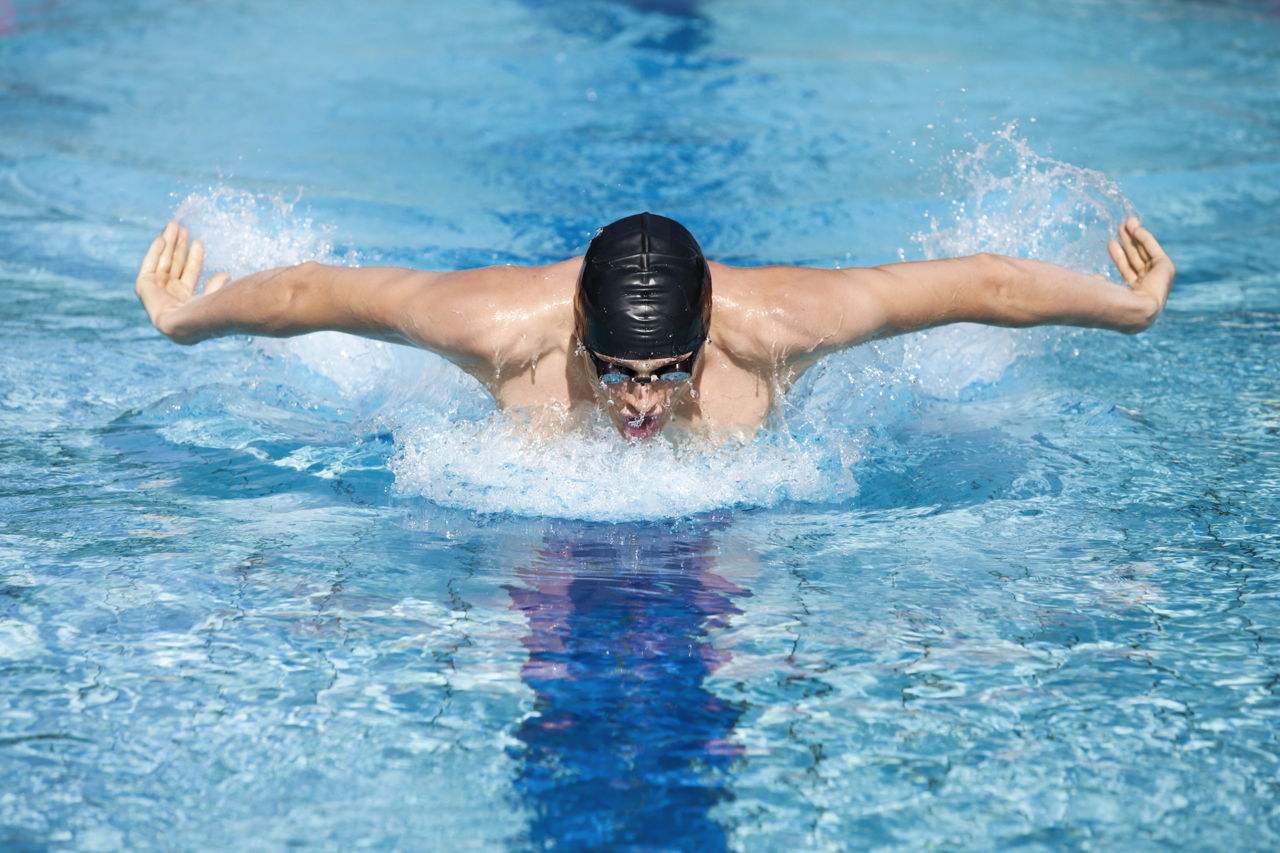 The man, the legend, Michael Phelps, needs no introduction. Here’s a look at the life of the most decorated Olympian ever and his MANY achievements over the years.

This is how Michael Phelps summed it up after having blown the competition right out of the water and set his eyes on some more World Records at the Beijing Olympic Games in 2008. At 6′ 4″, Phelps certainly towers over most people his age, both in terms of height and stature. In just 27 years, this young lad from Baltimore, Maryland, has achieved more than what his peers and even the greatest sportsmen of all time would not even have dreamed of – 8 Golds in a single Olympics! And, as he has showed with his performance in the latest edition of the meet of the nations (London Olympics 2012), he is far from done! Here’s a looking back at his epic journey to the top.

The youngest amongst the Phelps’, Michael was born to Michael Fred Phelps and Deborah Sue Phelps. His father, Michael Phelps Senior, was a state trooper and his mother “Debbie” was a middle-school principal. His parents got divorced when he was just 9 years old, and Gomer, as his teammates called him, has been very attached to his mother ever since. His sisters Hilary and Whitney are swimmers, too, and in fact, watching them swim is what got Michael to take to the water. Around the time when his parents got divorced, Michael was diagnosed with ADHD (attention deficit hyperactivity disorder). This was another reason for his introduction to swimming, where he could put all his pent-up energy to good use. He instantly took to the water, although initially he wasn’t all too comfortable with the idea of putting his head under water, so he would float around for hours together on his back. He soon got used to the water, and in fact, mastered the complex butterfly stroke, one of the most lethal weapons in his arsenal today.

[ Back ]
The Making of a Legend

Michael was greatly inspired by swimmers Tom Malchow and Tom Dolan, as they fought it out for top honors at the 1996 Summer Olympics. At age 11, he joined the North Baltimore Aquatic Club, and his potential was soon discovered by Bob Bowman, who has mentored him ever since. With unusually long arms and feet, he was most definitely a water baby, born to swim.

Sydney Olympics – 2000
At the tender age of 15, Phelps became the youngest swimmer to represent the U.S. at the Millennium Games in Sydney. Although he did not win any medals at the Olympics, he showed the world glimpses of his brilliance, and by the end of the year, shot up the world rankings to the 7th position.

Athens Olympics – 2004
With the eyes of the world now set on this 19-year-old swimming sensation, Phelps did not disappoint with his impressive showing at the Big Stage. He set the ball rolling with a record breaking time of 4:08.26 in the 400 m individual medley, and clinched his first (of many to come) Olympic gold. Records kept tumbling, with Phelps setting the time to beat (3:30.68) in the 4×100 m medley, and winning the gold in the 100 m and 200 m butterfly, 200 m individual medley, and the 4×200 m freestyle events. He ended the games with a tally of 6 gold and 2 bronze medals.

World Aquatics Championships – 2005
After an extremely impressive showing at the Olympics the previous year, Phelps trained just as hard for the World Aquatics Championships in Montreal, Canada. After a rather uninspired start to his games, coming in a distant 18th in the 400 m freestyle, he was back in his element, as he was instrumental in his team taking top honors in the 4×100 m freestyle relay. He went on to strike gold in the 200 m freestyle, 200 m individual medley, 4×200 freestyle relay, and the 4×100 m medley relay. He lost the gold in the 100 m butterfly to his compatriot and rival Ian Crocker.

Pan Pacific Swimming Championships – 2006
The Pan Pacific Swimming Championships in Victoria, Canada, was the venue where Phelps won his first international medal (and also his last) in the 200 m backstroke. He notched up victories in record time in the 200 m butterfly (1:53.80), 200 m individual medley, and 4×100 m freestyle relay, and also won the gold for the 400 m individual medley and the 4×200 m freestyle relay.

Beijing Olympics – 2008
Cometh the hour cometh the man. The stage was all set for one of the biggest athletes of all time to show the world his true prowess in the water. Even his greatest fans didn’t quite expect the gold rush that came their way. Having pretty much dominated the world of swimming, it was just a matter of time before Phelps truly shone at the Olympics. Having already made a habit of crushing all the records that come his way, he won a record 8 golds (the most by anyone in a single Olympics), decimating the competition in all the events he participated in, and set World Records in 7 out of them. Here’s a look what he clocked in each of the events.

To put this achievement in better perspective, you might want to know that Phelps, with 8 golds against his name, would oust France (with 7 golds) from the top 10 medal table! His feat seemed so leviathan, that there were rumors that he might have used performance enhancing drugs. To put to rest any such speculation, Phelps had undergone all the anti-doping tests during the games, and had come clean. In fact, he had volunteered for a project by the United States Anti-Doping Agency, which puts the volunteers through tests that are a lot more stringent than the ones implemented by the World Anti-Doping Agency.

Pan Pacific Swimming Championships – 2010
In the Pan Pacific Swimming Championships held in Irvine, USA, Phelps secured 5 golds (100 m butterfly, 200 m butterfly, 4 × 100 m freestyle relay, 4 × 200 m freestyle relay and 4 × 100 m medley relay). Although he got the gold medals in all the events, the performance was just not good enough for him by his high standards.

World Aquatic Championships – 2011
In the last international swimming event leading up to the Olympics the following year, Phelps was in, probably what was one of his favorite hunting grounds, China. After getting off to a bad start to the games (bronze in 4 × 100 m freestyle relay), he quickly found his footing, and took the gold in the 100 m butterfly, 200 m butterfly, 4 × 200 m freestyle, and 4 × 100 m medley. He also settled for the second spot in 200 m freestyle and the 200 m individual medley.

At age 27, and possibly having little else left to achieve in the sport (having most conceivable and many other inconceivable records to his name), Michael Fred Phelps hung up his goggles after becoming the most successful swimmer at the games for the third time running at the London Olympics 2012. This was also influenced by his ‘poor’ showing (by Phelps own standards) in the preceding year. Bowing out in style, he bagged the gold in the 100 m butterfly, with a time of 51.21, in the 200 m individual medley (1:54.27), and also the 4 × 200 m freestyle relay. He also pocketed the silver in the 4 × 100 m freestyle, and for the first time since the medals started rolling at the Olympics in Athens, he has had to settle for the second place, in an event that he had made his own, the 200 m butterfly. Taking center stage for the last time in competitive swimming, he once again was instrumental in bagging the gold for his country in the 4×100 m medley relay, a perfect parting gift for his dedication to the sport for over 12 years. As he graced the podium for the last time, he was greeted with a rousing ovation by the crowd at the grand London Aquatics Center. He was understandably emotional, as he waved goodbye to the crowds, who over the years have come to worship this incredible sportsman. He was later honored by the international swimming federation, FINA, for becoming the most decorated Olympian of all time. To add to his expansive list of records, he now holds the distinction of being the only player in history to have won a gold in the same event for 3 consecutive Olympics (100 m butterfly). He has been unbeaten in it since the 2007 World Aquatic Championships.

This legend of the game is often touted to be the greatest sportsman of all time. While there is little doubt about his outstanding contribution to the world of sports, he has in the past been involved in a fair bit of controversy. Guess those are the few things that remind us that this demigod is still part human!