Rafael Nadal has been playing tennis since a very young age, and is currently the world's no.1 tennis player. Here's more about this tennis great... 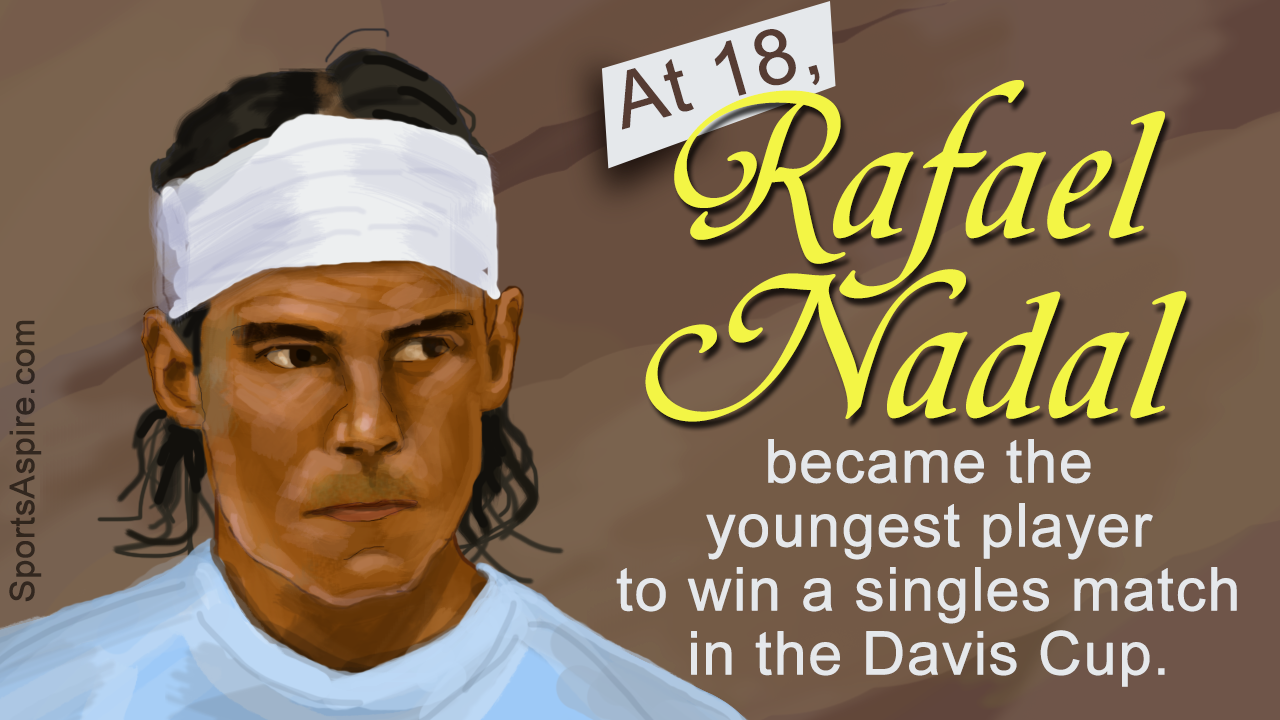 Rafael Nadal has been playing tennis since a very young age, and is currently the world’s no.1 tennis player. Here’s more about this tennis great…

Rafael Nadal Parera was born on 3rd June, 1986, to Sebastián Nadal and Ana María Parera, in Majorca, Spain. Rafa, as he is also fondly known, developed his love for tennis from his uncle Toni Nadal, a former professional tennis player, who introduced him to tennis at the age of 3. Rafael won his first tennis championship tournament at the age of 8. He plays an aggressive behind-the-baseline game, relying on fast and consistent footwork, and is a more than capable defender too.

Rafael’s professional career started in 2001, at the age of 15, when he won his first ATP (Association of Tennis Professionals) match. In 2003, he became the youngest male player to reach the third round at Wimbledon, since 1984, after Boris Becker. He played his first match against Roger Federer, his longstanding rival, at the 2004 Miami Masters, and won in straight sets. After this, he was missing in action for most of 2004 because of a stress fracture in his left ankle. However, in 2005, he went on a winning streak, as he won two ATP Masters Series in Rome and Monte Carlo. He also broke Andre Agassi’s 1988 record of winning 23 consecutive matches, by winning 24.

At 18, Nadal became the youngest player to win a singles match in the Davis Cup, and by beating the then World No. 2 Andy Roddick, he clinched the 2004 title for Spain. By that year-end, he was ranked No. 51 in the world, moving up from No. 762 in the year 2002! Nadal defeated Roger Federer in the semi-finals of the French Open, on his 19th birthday, and two days later, became the fourth youngest player to win the championship. The French Open win ranked him at World No. 3. He also won his first Grand Slam event and was the first teenager to do so since 19-year-old Pete Sampras who won the 1990 US Open.

After losing in the second round of Wimbledon in 2005, Nadal won in 16 matches and 3 tournaments in a row, positioning himself at World No. 2, on 25th July, 2005. By the end of that year, he had also won the ATP Most Improved Player of the Year award.

Nadal started 2006 with a foot injury, that forced him to miss the Australian Open. He defeated Federer in the Masters Series Monte Carlo, earning a record of 53 successive wins on clay courts. He once again played against Federer in the 2006 French Open, where Federer forced a tiebreaker in the fourth set. After this, Nadal won and became the first player to defeat Federer in a Grand Slam final.

In 2007, Nadal’s winnings were more on clay than on hard court. In April of the same year, he defeated Federer in the Monte Carlo Masters, but lost the Hamburg Masters title, ending his 81-match winning streak on clay, which became the male open-era record on a single surface. He clinched his third consecutive French Open, in June 2007, defeating Roger Federer in the finals.

He then clinched the 2008 Wimbledon title for the first time, in what is called the greatest match of all times. In the same year, he also won his second Rogers Cup title and the US Open Series. Nadal was officially ranked World No. 1 on 18th August, 2008, and carried forward his winning streak in 2009, at the Australian Open, by defeating Fernando Verdasco.

He missed most of the 2012 season due to injury, but came back very strongly in 2013, winning numerous tournaments, including Majors. As a result, he got back the World Number 1 ranking, and currently holds that position in men’s tennis.

Nadal is involved in a number of charitable organizations, such as Fundación Iberostar, an NGO that provides social welfare and cooperation for development in Spain and Latin America. In August 2007, in New York, he was part of the Dacor Taste of Tennis Food and Wine event, to benefit the Laureus Sport for Good Foundation, that works to improve the lives of individuals across the globe, through promoting sports-related activities and celebrating sporting excellence.

He launched the Rafa Nadal Foundation in Spain, which ‘seeks to promote sport as an integration tool for those groups in most need, focusing particularly on childhood and youth’. His mother Ana Maria Parera is the chairperson, and father Sebastián is the vice-chairman of the organization. His uncle Toni Nadal and agent Carlos Costa are also actively involved in the foundation. Besides these, Rafael is also involved in various other charitable activities.

Rafael’s success has made him a favorite in the world of advertising. He endorses Nike, who are his clothing and shoe sponsors. He is the global ambassador for the company Kia Motors, and has an agreement with Universal DVDs. He uses Babolat tennis racquet, which is a product of a French-based tennis, badminton, and squash equipment company.

Rafael’s tennis critics and other players regard him as the greatest clay-court tennis player of all time. He has achieved this with his perseverance, and mental and physical strength. He is a winner all the way!