Unraveling the Tale Behind the Invention of Football and Soccer

Football is one of the most popular games played in almost every corner of the globe. But, do you know how it all started, and how the game developed over the years? Let's take a look at the history of this wonderful game.

There are many sports being played all over the world, but if we need to acknowledge one as the king of all sports, it has to be football. But, wait a minute; what sport are we talking about? Different parts of the world relate football to different sports. For the US and Canada, it’s American football, Down Under they mean Australian rules football, in Ireland it is Gaelic football, and the rest of the world understands it as soccer. Damn! That’s a lot of interpretations. While we discuss the invention of football, we’ll talk in brief about the two most popular and widespread forms, i.e., American football and soccer.

The history of soccer dates back to England in the middle ages, when different rules were used, and the sport was played in an unorganized manner across high schools. In 1848, the Cambridge University made its first effort to set up some rules, and as such, the rules of the game came into existence, popularly called Cambridge rules. The rules set by the Cambridge University were followed by several clubs, besides schools and universities of various counties. However, some schools and universities, who initially followed these rules, went against the existing rules and decided to come up with their own set of regulations. This led to the formation of the Sheffield United FC, a body formed by former members of the Cambridge University.

These continuous efforts contributed and finally led to the formation of The Football Association (The FA), which held its first meeting on October 26, 1863. This was followed by minor confrontations of the members on some rules laid out by the FA, which led to a mutiny by a few member clubs to form separate associations. But this didn’t affect the FA much, as it successfully organized the FA cup, the oldest football competition in the world, in 1872. The world’s first league tournament started in Birmingham with 12 clubs. This league then evolved into the highly prestigious English Premier League.

With the rise in popularity of the game throughout the world, the beginning of the 20th century saw the need for a single international body to supervise the affairs of the game. On May 21, 1904, the Fédération Internationale de Football Association (FIFA) was established in Paris. The French name and acronym were accepted and adopted internationally, and FIFA started governing soccer even in non-French-speaking parts of the world. However, the laws that govern the game are not solely formulated by FIFA. They are the responsibility of the International Football Association Board (IFAB). The board has eight members, in which FIFA has 50% representation with four representatives. The other four being one each from England, Scotland, Wales, and Northern Ireland, in recognition of their unparalleled contribution towards the invention of the modern game of soccer.

Football, in the United States, is always referred to as American football, which is also known as gridiron football, and outside North America is referred to as tackle football. It is a highly physical and competitive team sport, and a number of strategies are involved in playing it.

Even if we’re talking about the American version, we need to go back to England. If we take a close look at football being played in America, we can see some resemblance between American football and rugby. The story of the invention of rugby is inscribed in everyone’s memories. It happened at the Rugby College in England, when a young British lad William Webb Ellis, while playing soccer, picked up the ball in his hands, and ran towards the goal post scoring a goal with the ball in his hands.

After this incident, people gave a thought to the development of a different game altogether. This is how rugby was invented. Over the years, rugby made its way to various British colonies, like Australia, Canada, and parts of the US. Every region added its own rules to the sport. In the US, it took the form of American football with a different set of rules. The year in which American football was invented cannot be pin-pointed. However, it is commonly believed that it was in 1892, when Walter Chauncey Camp, a sports writer, made significant changes in the rules of American football, and so, is given the credit for the invention of American football.

As the popularity of American football increased among the masses, the National Football League was formed in 1922, and it went on to become the most popular football league in the country. The American Football League (AFL), a rival league to the NFL, was established in 1960. It had tremendous backing and fan support. As both the leagues were equally popular, the organizers felt that if both the leagues were merged, the fan base would increase, thereby further increasing its popularity. This thought process led to the merger of the two leagues, which led to the formation of Super Bowl. Today, the Super Bowl has become America’s most watched annual television event.

So, both these equally popular games have their roots in England. While soccer evolved from various sources over a long period, the story of football’s invention is quite well-documented, and its popularity is limited to the US and Canada only. 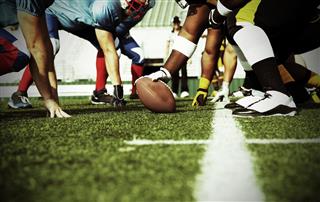 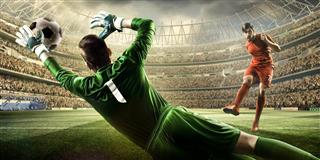