Kobe Bryant Vs. Michael Jordan: Battle of the NBA Legends

The debate to decide the better player between Michael Jordan and Kobe Bryant has rambled on for quite some time, and quite needlessly. Read on, for a statistical showdown between the two basketball giants. 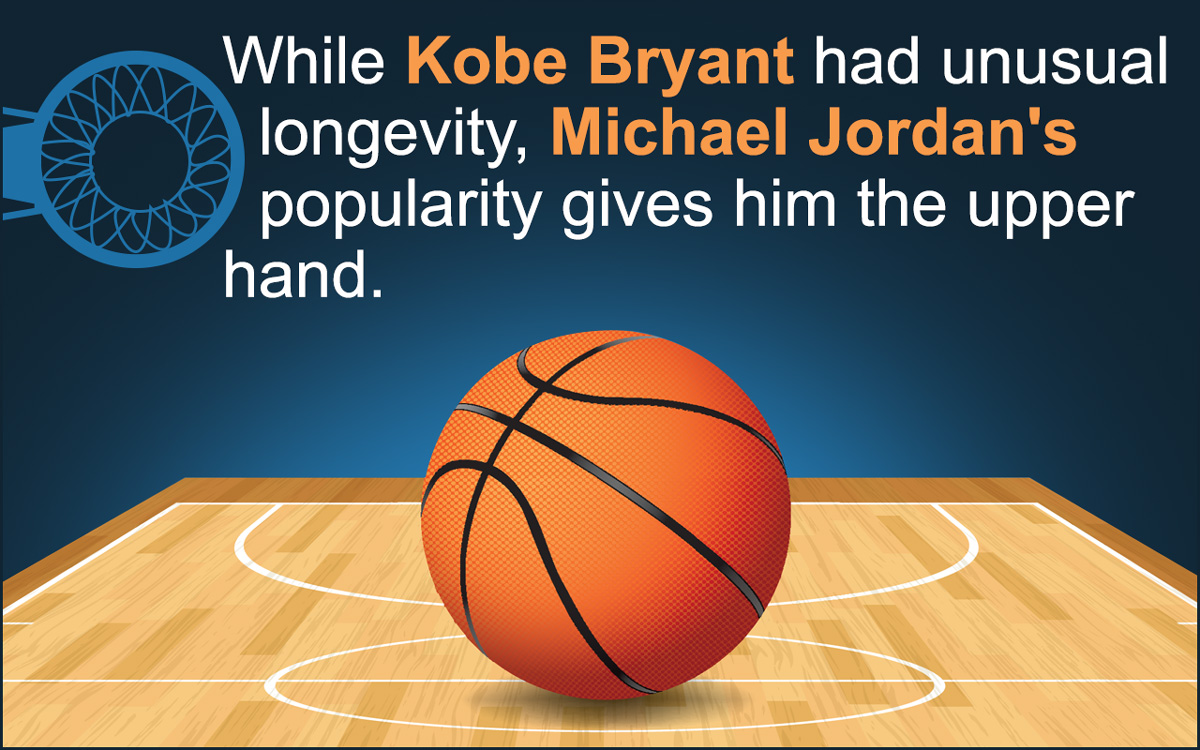 The debate to decide the better player between Michael Jordan and Kobe Bryant has rambled on for quite some time, and quite needlessly. Read on, for a statistical showdown between the two basketball giants.

Michael Jordan’s nicknames, ‘His Airness’ and ‘Air Jordan’, were coined due to his astonishing leaping ability. Jordan could leap from the 3-point line all the way to the basket, a skill he often displayed in slam dunk contests. Kobe Bryant’s nickname, Black Mamba, was chosen by Bryant himself, due to his desire to achieve the eponymous snake’s ability to “strike with 99% accuracy at maximum speed, in rapid succession”.

Michael Jordan or Kobe Bryant? The battle has raged on for quite some time. As Bryant has steadily climbed the path to NBA success and fame, he has inevitably been compared to the player considered among the greatest of them all: Michael Jordan, His Airness.

While many analysts recommend not comparing two players who played in different eras, that is what makes sports so interesting. And that is exactly what we intend to do in this write-up.

Here’s a comparison of two of the modern giants of basketball.

However, the remarkable rise of Kobe Bryant has resulted in him being considered among the greatest names ever to play the game. He has broken numerous records, and has been the vital heartbeat of a successful and superstar-filled LA Lakers team for many years. His meteoric rise, playing on the same position as MJ and modeling his game on the Bulls legend, has led to inevitable comparisons with Air Jordan himself.

Here’s a comparison of their careers, and where each of them scores or loses out.

As you can see, apart from the very few instances where Bryant’s longevity gives him the slight edge, His Airness trumps the Black Mamba in virtually every department.

Apart from his evident and famous mastery over a wide range of offensive skills, Michael Jordan was also renowned for his tireless defensive work, a criterion often used against Bryant. This made Jordan a more complete player than Bryant. He was known for his work ethic and ruthless trash talk. He was also much better in tense situations, and was a famous big-game player. He was so good that Bryant modeled his game on him; the student hasn’t quite caught up to the master, we must say!

Of course, we understand that one puny article won’t resolve this debate. Modern fans who only saw Jordan on YouTube compilations, if ever, will swear by Bryant as possibly the best NBA player ever. Meanwhile, those who know better will quietly whip out the statistics and enjoy the futile counterarguments.