A Guide on How Beginners Should Learn How to Play Tennis

Learning how to play tennis can be a lot of fun, if it really interests you. This game requires a certain amount of agility, cardiovascular fitness, and good vision.

Learning how to play tennis can be a lot of fun, if it really interests you. This game requires a certain amount of agility, cardiovascular fitness, and good vision.

For those of you who do not know much about tennis or are just beginning to learn the basics, we’ll cover everything from the equipment to the playing part. First though, we will only mention the obvious points, like you do need a tennis court (or somewhere similar to play), a person to play with, a tennis racket, and a ball. Initially, a net is optional if you are just learning to hit the ball to the other person, but for any real game, it would be a necessity, and these items are all available at any local sports store, or for rent at a recreation area for a minor fee.

The balls used in tennis can either be yellow, green or white. Though, in almost all official matches, yellow balls are used. The racket used is around 27″ in size. The strings of the racket should have all its stitches attached and unbroken, and cannot have any energy source attached which can affect the play. Neither can the strings have more than one set of stringed patterns on the racket. Shorts and a T-shirt for men, and shorts/skirt and a T-shirt/top for women is the normal dress worn in tennis matches. Generally, tennis outfits are white because they reflect the sun better, and are thus cooler. Although, in the past decade, many famous tennis players have been wearing other colors too. It is best to wear what is comfortable for you while playing, whether it is tight or loose. As far as shoes are concerned, proper tennis shoes should be worn, as jogging and walking shoes are not the best bet for playing this game. As opposed to running shoes, tennis shoes are made to withstand side-to-side movement and not just forward steps. Women, because they generally arch higher than men, should take care to get shoes with more arch support. Socks should be thick and absorbent in order to absorb sweat and thereby prevent infections such as athlete’s foot or other various infections. Shoes may differ according to the kind of surface the game is being played on. Surfaces are usually clay court, grass court, hard court, or even wooden court.

Some other important things about the equipment – The grip must fit right or it will hurt. To measure the correct grip size: hold out the hand that you will be holding the racket with, hold it palm-side up and measure from the crease to the tip of the ring finger, and that is the measurement around the handle. Generally, this is around 4 inches in diameter. Of course it is usually a bit bigger for men and older players than for women and younger players. It is important to maintain the grip, because should it wear out, it could be dangerous.

A standard tennis court is 78 feet long and 27 feet wide. This dimension is used for a singles match. For doubles, the length remains the same, while the width increases to 36 feet. The court is divided equally into two halves by the net, making each side the dimension of 39 feet long and 27 feet wide for singles, and 39 feet long and 36 feet wide for doubles. The net is in the center of the court supported by 2 poles on either side, which cannot be more than 6 inches in diameter. The height of the net is three and a half feet at the sides, while at the center it is three feet. The net needs to start from at least three feet outside the sideline, both for singles and doubles. Since a lot of running and retrieving is involved during play, there should be ample space around the playing court too. A total area of 120 feet in length and 60 feet in width is ideal.

A tennis match consists of either best of 3 or best of 5 sets. A player needs to win at least 6 games, with a difference of 2, to win a set. In case both players end up winning 6 games each, a tiebreak comes into effect. In a tiebreak, the first player to win 7 points wins the tiebreak. Again, this needs to be won with a difference of 2 points. Among the major tournaments, only Wimbledon does not enforce this tiebreak rule, if it is the deciding set.

For the games, the scoring of points goes like – 1st point: score reads 15, 2nd point: score reads 30, 3rd point: score reads 40, and the 4th points wins you the game. Again, a game can only be won if the point difference is at least 2. For example, if both players are 40:40 (deuce), then they continue playing till one player has won 2 points more than his opponent.

Rules of Tennis for Beginners

Coming to the rules of tennis, first, let us assume that we’re talking about a singles match being played. The winner in the coin toss gets to decide whether he wants to serve or choose the side of play. The first serve needs to be taken from the right half of the court, from behind the baseline, and the ball needs to be tossed in the air for the serve. No part of the foot should touch the baseline until the serve is complete. The receiver has to stand on the diagonal side on his half of the court, though he is allowed to stand behind or inside the baseline too, whichever he chooses fit. The serve should land in the service box, which is the square area just after the net on the opposite side of the court. The serve needs to be retaken if it lands outside the service box or into the net. This is called a fault, and a double-fault results in the loss of a point. After this serve has been returned, players can then hit and return the ball after one bounce in their side of the court, or even directly without letting it bounce. The next serve is taken from the left side of the court, and this sequence continues till the end of the game.

In a doubles match, all players serve turn-by-turn each game. That means, the same player gets to serve again every fifth game. Just like in singles, the first serve is taken from the right half of the court, and then the left. The two players in the serving team thus switch sides every point, while the players in the receiving team do not, which means that the player receiving each serve changes for every point. Once the serve is taken and returned, players can then go to any part of the court, hit the ball after one or without a bounce, and any player from each team can return the ball, meaning, from then on, no sequence needs to be followed in the course of the point.

Tennis is a great sport that can be either played as a pass-time, form of exercise, or even professionally. All the basic tennis shots need to be practiced day in and day out in order to get better and move on to a competitive level. If we take a look at all the past and present champions, they took up this sport as beginners when they were kids, and years of practice got them to where they are/were. 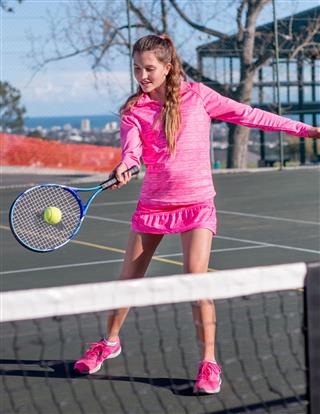 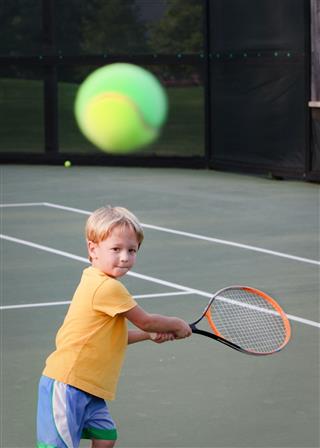 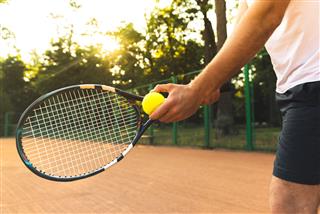 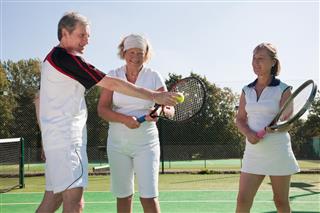 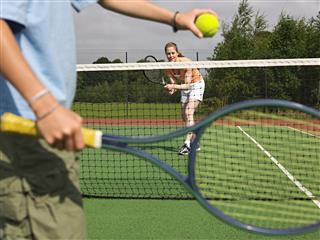 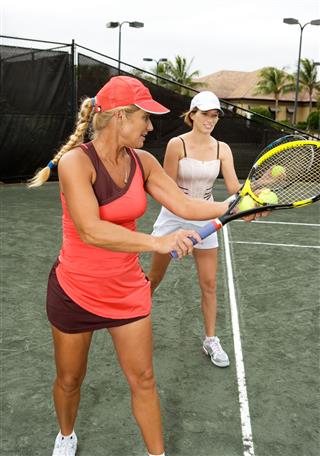 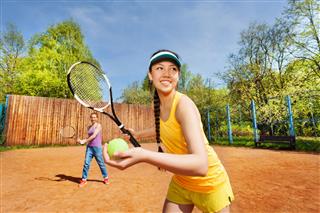 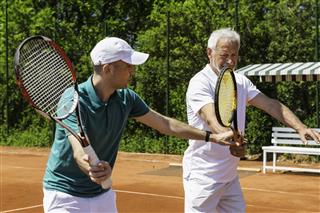 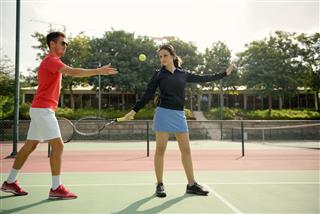 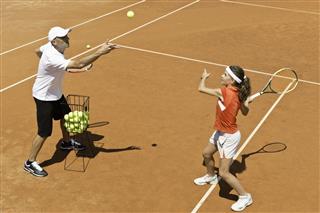 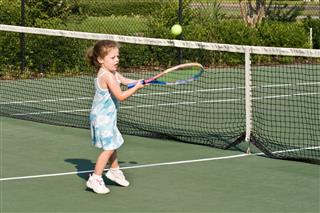