The game of water polo requires great stamina, for which the body muscles need to be strengthened. The drills mentioned below will teach some basic skills as well as help in building stamina.

A water sport played with 7 players in each side (goalkeeper + 6 players), water polo involves different activities like swimming, passing the ball, scoring goals, and also defending one own’s goal. There are some drills that are simple and deal with the basics of handling the ball and swimming, which involve the egg-beater kick, heads-up freestyle, etc.

The flag drill is conducted to make the players aware of the hand gestures they have to encounter in real matches. In this drill, players can be lined up in a row of 3 – 4. The gesture in which the hand is kept straight up in the air indicates the players to do the egg-beater kick. There is another hand gesture in which the hand is pointed to a particular direction. The players have to start swimming in the direction indicated by the hand. The swimming technique used to perform the flag drill should be the heads-up freestyle.

The double bobbing drill is performed to enable players to breathe quickly. This drill is performed in pairs, with the players facing each other and holding both the hands with a finger grip. One of the partners should take a dip while keeping the arms straight and at the depth of the partner’s knees. The player should come back to the surface for breathing, while simultaneously pulling the partner under water. Both players should take dips alternately, and gradually increase the tempo.

The shoulder wrestle is meant to condition the back and stomach muscles. In this drill, pairs of players are formed, and they place their hands on the shoulders of their partners; the elbows should be kept straight. Both the players try to submerge their partners by pressing down the shoulders. The drill ends if one of the partner ducks. It is a fun drill, which also helps in strengthening the back muscles.

Here, the goalie has to move from side-to-side to the ends of the goal cage. This has to be done with the help of the egg-beater kick. The goalie should keep his hand straight up in the air, while he moves from side-to-side. Moving from one side of the goal to the other and back again completes a set of two. The goalie should be given a rest of 15 – 30 seconds in between two sets. 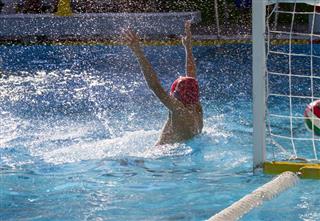 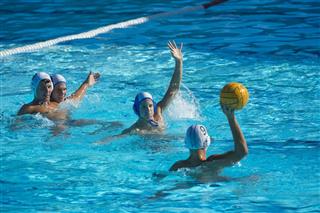 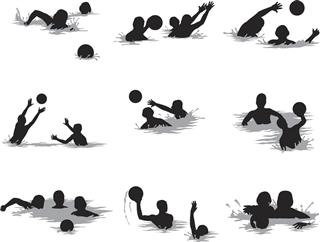