In order to get better in bowling, apart from perfecting the game, you should also understand its terminologies. Read the SportsAspire article to find definitions of different bowling terms used.

In order to get better in bowling, apart from perfecting the game, you should also understand its terminologies. Read the SportsAspire article to find definitions of different bowling terms used. 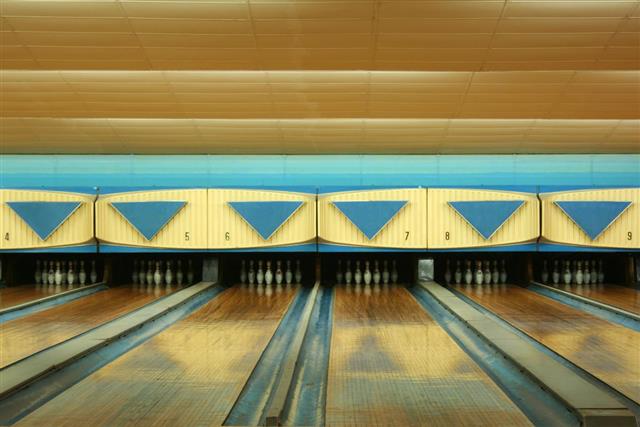 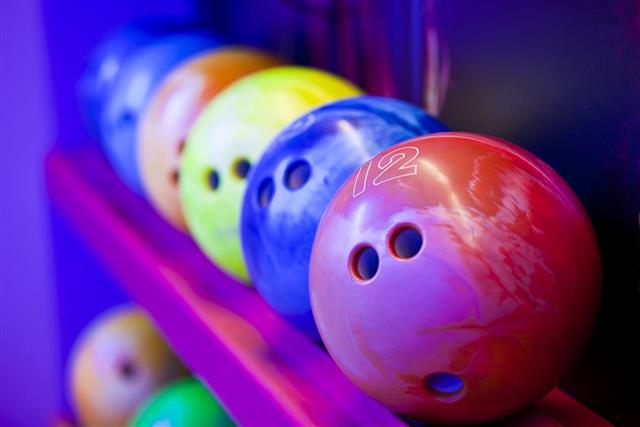 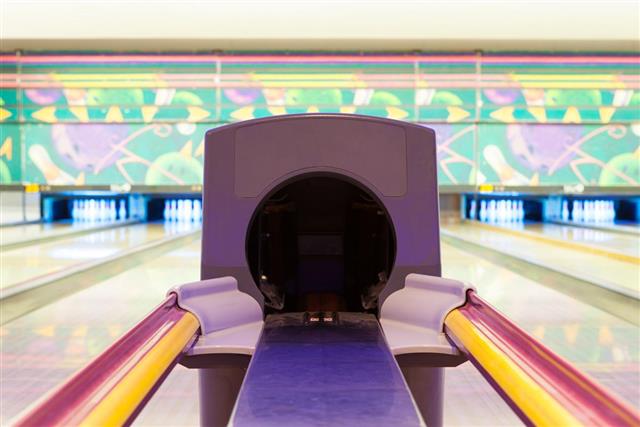 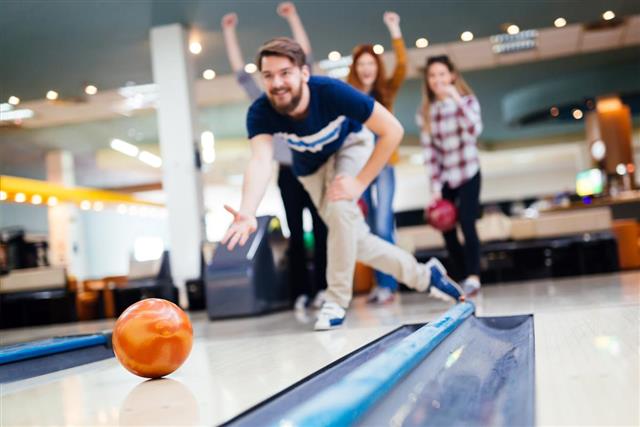 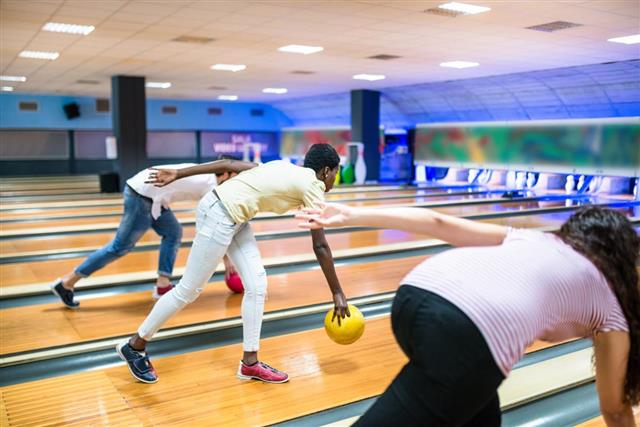 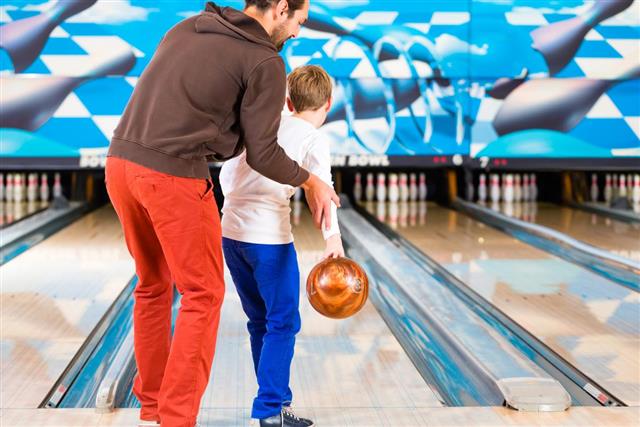 A ten-pin bowling, more popularly known as bowling, is a competitive sport. The game involves bowlers to roll a bowling ball down a wooden lane. At the end of the lane are 10 pins, lined in a triangular shape, some lined behind each other, which need to be knocked down. The player scores according to the number of pins that are knocked out of the way. There are 10 frames, and each player gets two turns per frame to clear all the pins.

Surface of the lanes which is made of maple, pine, or urethane boards.

Finishing a game with only strikes.

The last participant to bowl in a team competition.

The direction taken by the ball while traveling into the 1―3 pocket for right hand bowlers, 1―2 for left hand bowlers.

Portion of the lane (path) from the back of the ball return area to the foul line.

The entire arm movement, from the arc of your bowling arm (right or left) and hand from the initial move toward the line till the ball is released over that line.

Throwing or releasing the ball too delicately or carefully.

The final 6 feet of the lane.

Interfering to stop or mess up some other bowler’s normal actions.

The rack used to store balls or where the balls returns and rests before a turn.

Path between the lanes where the ball rolls on when it’s returning to the rack.

A weak hit on the headpin.

Increasing the width of a hook from the inside of a starting point.

Conversation or actions intended to disturb an opponent.

Hook or twist shot that comes really close to the channel just before breaking into the pocket.

Spare of 3 on one side and 2 on the other side.

Score allowed for a missing member.

A successful strikeBlowoutKnocking down all the pins but one.

4-pin diamond on the sides or the center of the lane.

3 open frames available in a row, for one participant.

Power of the ball to knock down pins.

When any bowler’s elbow gets out from his body while performing a swing.

Chopping the front pin of a spare while a pin behind/left/right remains.

Hook in the pocket caused by a spin on the axis.

Knocking down all the pins that were left behind with your second ball.

A strike made by leaving out the head pin.

Missing in a final frame when a spare could win.

Ball that travels from right to left.

A hook that slices the pins down.

The ball when it makes contact with pins and then angles aside to the right or left.

A ball that hooks itself at the last moment.

Two strikes made in a row.

When 1 pin is directly behind the other pin.

Releasing the ball without bending your knee.

A strike made in the 8th frame.

Leaving the ball before the bent, sliding foot completes its slide.

Acronym for “Even Full Rollers Are Hooking”; lanes are very dry.

The angle relative to the pocket (the ball enters the pocket). If the angle is increased, the strike will also increase.

The bonus for participant for filling the 10th frame.

A split where it is possible for the ball to hit both pins simultaneously.

The motion after release.

Touching or going outside the foul line.

The mark that decides the origin of the lane.

A strike in the 9th frame.

The friction caused between the lane and the ball.

An alignment of pins left standing.

Drop offs about 10 inches wide to the right/left of the lane to lead the ball to the pit.

A ball that goes into the gutter.

Difference between a full and light hit.

Pins presented to weak participants or teams in an effort to make the game even.

Front pin of a rack.

More to the left or right.

Favorite lane for participants or teams.

A ball that travels to the left or right.

Bowling balls provided by the alley.

Oily or heavily conditioned lane as the ball keeps skidding.

A starting point near the center of the lane.

Releasing the ball and landing on the foul line with the sliding foot at the same time.

Force the ball high inside the pocket.

A ball that hits on the other side of the participant’s normal pocket.

The headpin or the number 5 pin.

Money from team members for misses, and other set fines.

When the 10 pin pauses and is the last to go down on a strike.

First man to bowl in a team game.

A hit excessively light on both sides of the head pin.

The route a bowling ball takes.

Throwing the ball onto the lane rather than revolving it.

A tap from a moving pin which knocks it down.

A component of the tournament where participants are matched against each other.

A pin that comes across the lane after all the others have fallen down.

A ball that makes the pins to rebound around.

A nickname for the gutter.

To start from the center of the approach.

To start from a corner position on the approach.

The weight on a ball which tends to hold back the hook or rolls earlier than anticipated.

Never Up, Never In

An idea/philosophy which states that if a bowler wants to make a strike, he/she must first hit the headpin.

No Drive No Five

The expressions means that a bowler should take the 5-pin out on a pocket hit, as the ball travels through the deflection from the headpin to hit the 5-pin

The beak/center of the headpin.

To hit the pins dead center.

A ball which accomplishes very little due to a poor hit.

To hit to the headpin in the center.

Non-league plays for fun or practice opposite league nights.

Area on the lanes where a ball won’t make it to the pocket.

To enforce too much spin to the ball.

To clutch the ball too hard.

Space at end of lane where ball and pins end up.

Angle in which the holes of the bowling ball are drilled.

The parts of the lane from the very back of the ball return area up to the foul line.

Parts of a league schedule which call for teams.

Competition in which two participants place a stake.

A strong ball that strikes.

A shot where absolutely everything (approach, release, etc) come together at perfect timing with balance.

When a single pin is left behind on a good hit.

A team that shoots low scores for one game.

The movement of hand as ball is rolled onto a lane.

The track which balls roll from pit to the rack.

The number of turns a ball takes when leaving from release to pins.

The spin to the ball at the time of delivery.

A bowler who keeps his average down in order to receive a higher handicap.

The path taken by a sharp curve ball.

The length you allow between your standing position and where you want the ball to go.

A ball rolled in practice without any pins set.

Rolling a ball from the hip.

The last step of delivery.

A ball that knocks down all the pins.

All pins knocked down with two balls.

Pins standing up after the first ball is rolled.

A strike where the pins are knocked down rapidly.

An area of lane where maple and pine boards connect.

A spare leave in which the headpin is down.

Direct on lane at which the bowler can aim.

To get more pins than you merit on a strike.

All 10 pins get knocked down.

3 or more strikes in a row.

The arm and hand movement throughout the delivery over the foul line.

A ball used in pro shops to build a bowler’s finger size and span for drilling.

Two pins lined one behind the other.

When a pin remains standing up on a perfect strike.

A lead member creditworthy for all participants being present, arranging for a substitute participant, and influencing team lineup.

A perfect game of 12 strikes in a row.

Three of the four pins of the bucket.

Squeezing up strikes with many speed balls.

Most used area on lane.

A strike where the pins seem to fall separately.

A high hit which results in a perfect strike.

In a tournament, the number of pins each participant is scoring under a 200 average.

When a ball productively travels over a high board.

Drilling a small hole into a bowling ball to relieve suction on the thumb hole.

A particular strike which is light in the pocket where all the pins are deflected into the kickbacks. Later returning to the pin deck to knock down other pins.

A flat hit which leaves one pin or a pocket split.

It’s what you say when you lose the ball in your backswing.

Throwing a big hook back to the pocket.

In the zone and consistent with high scores.

One of the many accessories worn by bowlers to help keep a firm wrist during backswing.

Make a spare out of a split leave.

A short where the 6-pin almost hits 10-pin, however spins around it and keeps it standing.

The action of completing the game with all the strikes from a given point in the game.

When a bowler clings onto the ball for too long.

Old polyester bowling ball made by Columbia which is famous for giving an excellent roll and hit.

Find the perfect strike spot on a lane, usually after a bad hit.

Lined up in the groove, powerful and consistent.

Symbol for a spare. 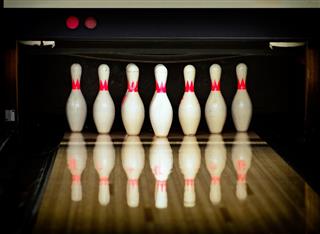 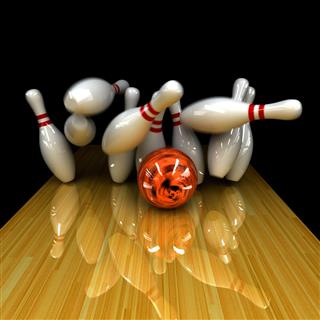 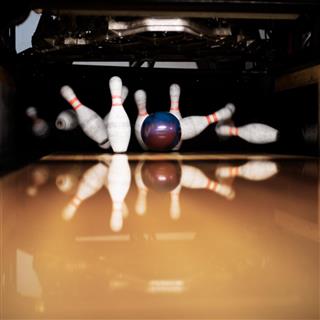 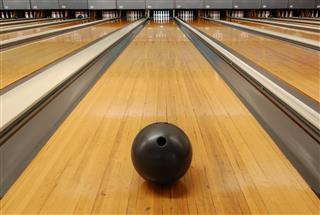