A fan of horse racing or not, here's some interesting information about this sport. From the various types of racing to the dangers associated to this sport, know it all, here! 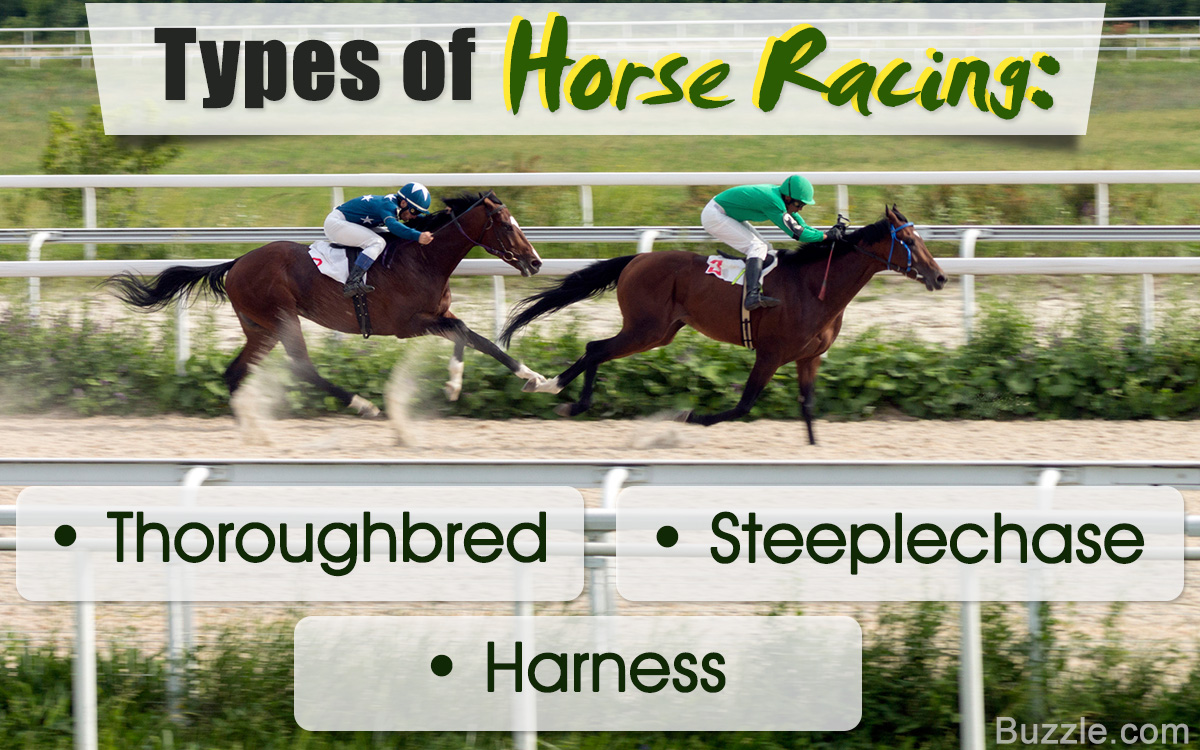 A fan of horse racing or not, here's some interesting information about this sport. From the various types of racing to the dangers associated to this sport, know it all, here!

Famous as the ‘Sport of Kings’, horse racing is one of the oldest sports that has been in existence for centuries. Its history dates back all the way to 1500 BC, and is said to have been originated in Egypt.

In Greece, chariot racing was a part of the Olympic games since early times, whereas in England, it became popular when King Henry II mated the Arab stallions with his mares, and started racing them.

However, as the days rolled by, people started betting money on the horses, and the sport is now a great gambling sport all over the world. So what is it that makes people put their heart and soul into this sport? Is it the thrill or is it the craze? Well, everyone has their own reasons, but this sport remains to be the favorite-most of all times.

Depending on the age, rank, and the weight that the horses carry, horse racing can be divided into three main types. They are as follows:

The name of this race comes from the horse breed ‘Thoroughbred’, which was a result of crossbreeding between Arab and English horses in the 17th century.

Thoroughbred racing is of two types – flat racing and jump racing. A flat race has a varying distance, whereas a jump race has a distance of two miles to four and a half miles. Though the distance varies for every race, a thoroughbred race is not more than 12 furlongs and not less than 5 furlongs.

The racetrack is usually an oval shape, the biggest being the Kentucky Derby in the United States.

A harness race is one where the horses pull a two-wheeled cart called sulky, in which the driver is seated. Only ‘Standardbred’ horses are used in a harness race.

These horses do not gallop like the Thoroughbreds, but trot at a fast pace. Depending on the movement of the horse, the race is divided into two different types viz., trotting and pacing. In trotting, the horse moves his legs diagonally, whereas in pacing, the horse moves laterally.

Trotting races are mostly held in continental Europe, whereas in Australia, United States, United Kingdom and Canada, both trotting and pacing races are held. The Roosevelt Raceway on Long Island New York is the largest harness racetrack.

Steeplechase is that form of horse racing which is held on an uneven surface, with hurdles like plain fences, water jumps, and open ditches. These races are mainly held in France, United Kingdom, Canada, Australia, United States and Ireland.

The obstacles used in the race are up to 1.15 meters in height, and the distance to be run over is about 3200 meters. The horses are also supposed to carry weights ranging from 136 lbs to 150 lbs.

The most famous Steeplechase racing is the Grand National which is held at the Aintree Racecourse in Liverpool every year. In Great Britain and Ireland, the official term used for this race is National Hunt Racing.

Handicap, open, novice, claiming, selling and maiden races are some other races that are run with minor changes in the rules, depending upon the age and experience of the horse, as well as the distance of the race.

Different types of horses are chosen for different races depending on the racing conditions. The most common breeds of race horses consist Quarter, Arabian, Thoroughbred, American Saddlebred, Oldenburg and Trakehner.

As mentioned, Thoroughbred horses are used in fast-pace races, whereas Standardbred are used in a harness race. The Arabian horses are famous for their performance in endurance races, while Quarter horses do very well in short distance sprinting.

Not only do these horses differ from each other in terms of their pace and physical appearance, the temperaments also vary from horse to horse. While some of them are intelligent and spirited, some are calm yet alert.

Although all horses are friendly with humans, they can turn vicious if treated badly. Be it any horse, when participating in a race, it is of utmost importance that it is a pure breed.

The mother and father of the horse (sire and dam) must be of the same breed, and must be of a standard breed that qualifies for racing. It implies that every horse is good for a particular distance of racing. The horses are then bred and trained accordingly.

Although all horses have a natural ability to run, they have to be trained to build up stamina for racing. The training of a racing horse starts with short gallops for muscle build-up.

Once the horse is fit enough, it is made to run long distances and trained for longer hours. The horses are also given massages (Equine massages) to improve their performance, and to ease pain, if any. After the horse is two years old, it is introduced to racetracks for speed training.

As far as the diet is concerned, the horse is given a protein-rich diet along with vitamin supplements. Minerals like calcium, zinc and phosphorus, essential for the horse’s growth and development, are also included in the diet.

They are given small meals at regular intervals which contain more of grain and less of hay or forage. To make up for the mineral loss caused during the race, they are generally given an electrolyte solution for drinking post-race.

Betting on race horses has been a favorite pastime for most wealthy men for many years. A number of industrialists and business tycoons put their money in horse racing and the gambling associated with it.

Although it was limited only to the upper class when it began, it is now popular amongst people from all classes and backgrounds. And now that it is legal in most countries, there has been huge involvement due to the large amount of money raked in.

Betting is usually classified into three types, namely, bet to win, bet to place, and bet to show. Betting on a horse for ranking first in the race is known as ‘Bet to Win’.

Staking money on a horse to either rank first or second is ‘Bet to Place’, and betting on a horse to turn up in the top three is ‘Bet to Show’. The first type of bet brings in more great prize money, while the other two are relatively low, since their probability of occurrence is greater.

The dangers associated with horse racing have come into the limelight after the death of the Kentucky Derby winners Barbaro and Eight Belles in 2006 and 2008 respectively. Reports show that 24 horses die at the American race tracks every week, on an average.

It is even more dangerous in case of fast-pace races, because the faster the horses run, more severe is the fall and the resulting injury. Experts say that laying softer tracks like polytracks, can be safer for the horses than the hard-mud surfaces. The California Senate passed a bill regarding the same issue following Barbaro’s death.

Not only for the horses, horse racing is life-threatening to the jockeys too. They often fall down from their horse and are crippled by the other horses running over them, causing spinal cord and even brain injuries.

According to the Jockey’s Guild statistics, 153 riders have died in America on the racetracks since the year 1940. Measures like giving better financial aid to the injured jockeys and implementation of on-site medical facilities can be taken.

The National Thoroughbred Racing Association has stated that its Safety and Integrity Alliance will help implement all these measures. Well, we hope so too, otherwise, it won’t be too long for the reign of this beloved sport to come to an end.