Fun and Interesting Facts About Soccer You Just Can’t Miss

Soccer is the most widely played and followed game on planet Earth. It is something like a religion for millions from all across the globe.

Soccer is the most widely played and followed game on planet Earth. It is something like a religion for millions from all across the globe. 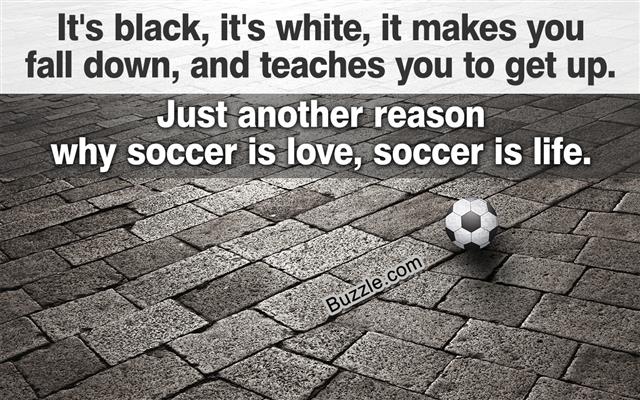 Success is no accident. It is hard work, perseverance, learning, studying, sacrifice and most of all, love of what you are doing or learning to do.

In reality, the name soccer is a corrupt form of the original term ‘association of football’, abbreviated as ‘assoc’, and is the most recognized sport in the world today. Played in almost every country and unequivocally loved, soccer is rather worshiped like a religion, with its star players treated like Gods. Nevertheless, there is a lot about soccer that even the most avid fans are unaware of. Which is why, this article brings forth some of the coolest facts about soccer which everyone, not only soccer fans, would love knowing.

The Romans played a game named ‘harpastum’, which can be said to be the ancestor of the modern game of soccer. In the early days of the game, referees used to wave a handkerchief to control the players and the game, and whistles were introduced in the game only in the year 1878.

Undoubtedly, the sport is most popular in Europe and South America. However, its origins can be traced to China, more than 2,200 years ago. This was around the time of the Han Dynasty, around 200 BC. Some versions even talk about a ball that was first used which was the head of a Dutch brigand. It is also believed that in medieval times, kicking, punching, biting, and gouging was allowed during the game.

In 14th century England, the game was banned by King Edward III for being too violent and also excess military indulgence, but ironically, the first ever soccer match was played in Derby, in England itself. It is also believed that the game developed at the Newgate Prison in London, in the early 1800s, where those prisoners whose hands were cut off for crimes like robbery, came up with a game that could be played by the feet.

The game supposedly came to the United States in the 1850s through New Orleans. it is believed that Scottish, Irish, and German immigrants brought the game here with them. Soccer became an Olympic sport in the year 1908.

The popularity of soccer spread rapidly during the 1800s, as British sailors, traders, and soldiers took the game with them and introduced it to different corners of the world where they traveled. In fact, FIFA recognizes that no historical connection exists with any game that was played in antiquity outside Europe.

– A soccer ball is around 28 inches in circumference. More than 80% of the world’s soccer balls are produced in Pakistan.

– The 1950 World Cup final between Uruguay and Brazil at the Maracana Stadium recorded the highest number of spectators―199,854.

– The first ever women’s World Cup was held in 1991 in China, and was won by the United States.

– The first live coverage of a soccer match shown on television, was in the year 1937. It was a practice match between Arsenal and Arsenal Reserves at the Highbury stadium on September 16.

– During a soccer match played in Paraguay between Sportivo Ameliano and General Caballero, a total of 20 red cards were shown.

– In the 1996 African Nations’ Cup, Liberian player George Weah paid for the team’s uniforms and all the expenses, so that the team could play in the tournament.

– The Football Association Challenge Cup, more popularly known as the FA Cup, is the oldest soccer competition in the world.

– The World Cup trophy weighs nearly 13 pounds, and is made of 18 carat gold.

– More than 200 countries enter qualifications for the World Cup in present times.

– Until the year 1882, there were no crossbars on the goals, which meant that any ball that went in between the two side posts at any height was considered a goal.

– The first player to be red carded was Chilean player Carlos Caszely, during the 1974 World Cup.

– In 2002, German international Oliver Kahn became the first goalkeeper to win the most valuable player in a World Cup.

– In the year 1998, April Heinrichs became the first woman to be inducted into the National Soccer Hall of Fame.

– Sir Stanley Matthews was never ever booked in his long career that lasted 33 years.

– Pelé is the only player in the world who has been part of 3 different World Cup winning teams.

– Pelé’s scoring ability has been matched by no one ever. He has scored 8 goals in a game, 5 goals six times, 4 goals thirty-one times, and a hat-trick on 92 occasions.

– In the 1982 FIFA World Cup, Italian goalkeeper Dino Zoff was also their captain. Italy won the tournament, making Zoff, who was 40, the oldest captain to win the World Cup.

– Just Fontaine of France scored 13 goals in the 1958 World Cup, which is the most by any player in a single FIFA World Cup.

– Turkey’s Hakan Sukur holds the record for the fastest goal in a World Cup game, when he scored one against South Korea within 11 seconds from the start, in 2002.

– Lothar Matthaus has appeared in the most number of World Cup games, a staggering 25.

– Bert Patenaude of the United States scored the first hat-trick in the World Cup, scoring all 3 in a game against Paraguay in 1930.

– Roger Milla from Cameroon holds the record for being the oldest player ever to score in a World Cup game. He was 42 when he scored in the 1994 finals.

– India pulled out from the 1950 World Cup because the players were not allowed to play bare feet.

– Arsenal were earlier known as The Arsenal. But under the management of Herbert Chapman, the team’s name was changed to Arsenal so as to appear at the top of the old Division One clubs list.

– Brazil never lost a single match when Pelé and Garrincha played together.

– Hungary beat El Salvador 10 – 1, making it the most goals ever scored in a World Cup soccer game.

– Scotland has been to the World Cup 8 times, and has been eliminated in the group stages on all 8 occasions.

– Only 6 of all the World Cups till now have been won by the host country.

– Rangers, a Scottish team, has won a staggering 54 titles.

– The entire Democratic Republic of Congo team was killed by lightening during a game in 1998. Surprisingly, no one from the opposite team were killed.

– A single player, on an average, runs about 7 miles during an entire soccer game.

– Nigerian born Chelsea player Celestine Babayaro injured his leg while celebrating his debut goal in a preseason match, while Luigi Riva, an Italian international player, broke an arm of a spectator due to his powerful shot.

– Italian striker Giuseppe Meazza’s shorts fell off when he was taking a penalty shot in a semifinal match in the 1938 World Cup. However, he continued on calmly to take the shot, and scored the goal.

– China banned the video game Football Manager 2005, because Tibet and Taiwan were included as separate countries.

– The USSA (1919 – 1921) was the first professional soccer league in the United States. Players were paid 35 cents for every goal that they scored.

– In 1950, the original world cup which was made of papier-mâché had to be replaced because of heavy rains.

– Till the year 1908, soccer balls were made from the inflated stomach tissue of Irish prisoners that had been executed.

– Till the year 1991, soccer was illegal in the US state of Mississippi.

– The United States has almost 18 million official soccer players, more than any other country in the world.

– Turkey went on to knock out Spain from the 1954 World Cup in a qualifier by drawing straws. Italian Luigi Franco Gemma was blindfolded and picked the straws to decide the winner.

– Martin Sylvester, an English referee had himself sent off during an Andover and District Sunday League game in 1998, after he punched a player during the game.

– In the 1930 World Cup final, referee Jean Langenus of Belgium was wearing a suit jacket, tie, and golfing pants while officiating in the game.

– Dutchman Dennis Bergkamp suffered from the fear of flying. This caused him to miss many international games for Arsenal.

– Cristiano Ronaldo was nicknamed ‘cry-baby’ when he was a child.

– David Beckham suffers from Ornithophobia, which is the fear of birds.

– In a qualifying match for the 1994 World Cup, Chilean goalkeeper Rojas faked being hit by fireworks. He was banned for life and Chile were banned from the 1994 finals.

– It was only in 1984 that professional soccer players were allowed to take part in the Olympics.

– Soccer is actually supposed to be a non-contact sport.

– In 1978, in Tanzania, a referee was arrested during a game, because he had smoked marijuana just before the match started. 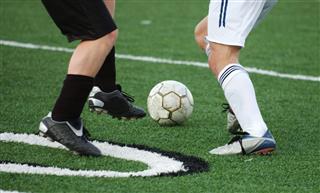 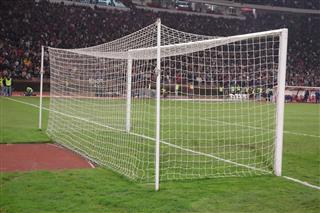 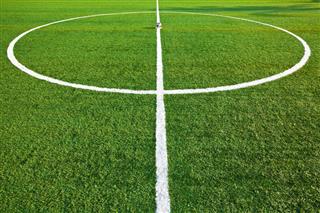 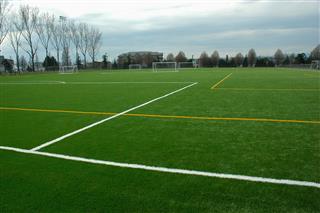 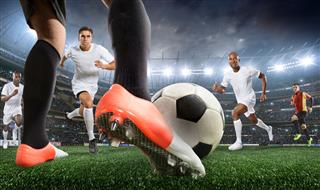 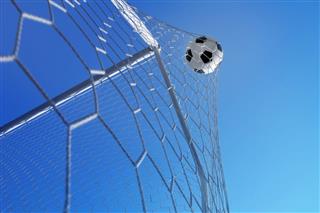 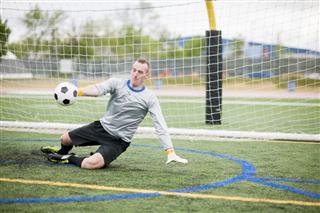 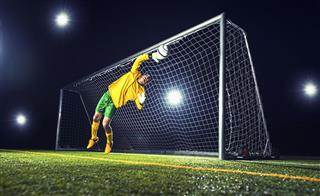 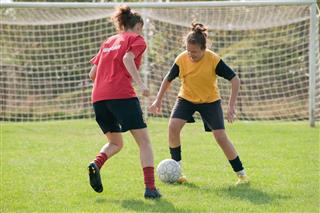 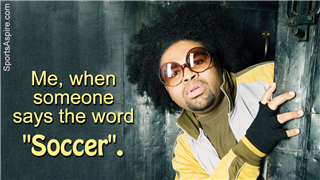