Understanding the Taoist Movements and Philosophy of Tai Chi

Tai Chi is one of the oldest known training methods for self realization and inner development. Here is an overview of what it all really means.

Tai Chi is one of the oldest known training methods for self realization and inner development. Here is an overview of what it all really means.

Taoism: The Philosophy of Tai Chi

Taoism, or ‘The Laws and Ways of Virtue’, is essentially grounded on an understanding of balance.

Originating from the principles of Lao Tzu, the Chinese philosopher, Taoism proclaims that inaction, as opposed to action, is a solution to the chaos and anarchy that rules supreme in an advancing world. The lethargic should not take heart, though―the Taoist inaction comes with a lot of fine print.

Though regarded as the father of Taoism, Lao Tzu was not the founder of the Taoist philosophy. Religious teachers and thinkers such as Shen Tao had first penned down the principles underlying the philosophy, but it was undoubtedly Lao Tzu who brought their thinking to the fore, thereby attempting to create a new way of life.

According to the Taoist ideal, chaos is the result of human action and desires, and inaction is the key to preventing chaos. By inaction, it is not meant that all action should be suspended―the philosophy simply states that human actions should be in harmony with nature, and not try to overcome it.

Taoism calls people to eschew the pursuit of knowledge, and to rely more on understanding nature by harmonizing oneself to her ways.

The Tao abides in non-action,
but leaves nothing undone.
If rulers observed this,
Then several things would develop naturally.
If they still wished to act,
They would act to return
to the simplicity of formlessness.
Without form there is no desire.
Without desire there is calm.
Thus all things would be at peace.

Thus, Lao Tzu says, by limiting desires to the basics, the world can return to the tranquil harmony that is of nature.

The Evolution of Tai Chi

As Taoism evolved over the years through the teachings of Lao Tzu and other philosophers, it was realized more and more that spiritual development also called for a sound physical being. Teachers like Chuang Tzu (399 – 295 BC) first introduced the movement philosophy through their writings, which forms the core philosophy of Tai Chi.

In the sixth century AD, a Buddhist scholar Bodhidharma (known as Ta Mo in China) visited the Shaolin monastery, and introduced the eighteen-form lohan exercise to aid the physical development of the monks.

Over time, this eighteen-form exercise gave rise to the ‘Wei Chia’ school of exercise, which takes an ‘external’ approach to physical development. The philosophy of Tai Chi is essentially intrinsic; however, the origin of the movement philosophy was grounded in Wei Chia.

Later, in the early 14th century, Chang San Feng of the Wu Tang monastery introduced the Yin-Yang concept (the concept of duality―male/female, dark/light, etc.) of Taoism to the Wei Chia forms of exercise, and introduced the thirteen postures of Tai Chi.

These thirteen postures stressed on balance, flexibility, and agility, rather than force, and marked the first shift towards the ‘Nei Chia’ (internal intrinsic) school of exercise. The current form of Tai Chi is an elaboration of these thirteen postures, developed and modified later by scholars such as Wang Chun Yueh, Chiang Fa, and Hao Wei Chen. 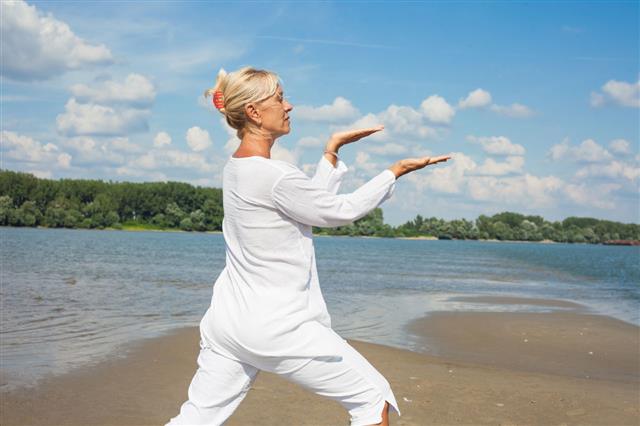 As stated elsewhere, Tai Chi differs from other forms of martial arts, such that, it has an intrinsic approach. By ‘intrinsic’ it is meant that Tai Chi, as also Taoism, draws on the inherent internal strengths of the being, through an understanding of equilibrium.

The Taoist principle of achieving action through inaction is deeply ingrained in Tai Chi, which strives to achieve equilibrium through tranquility as opposed to force. In keeping with this principle, many of the Tai Chi forms have names like: 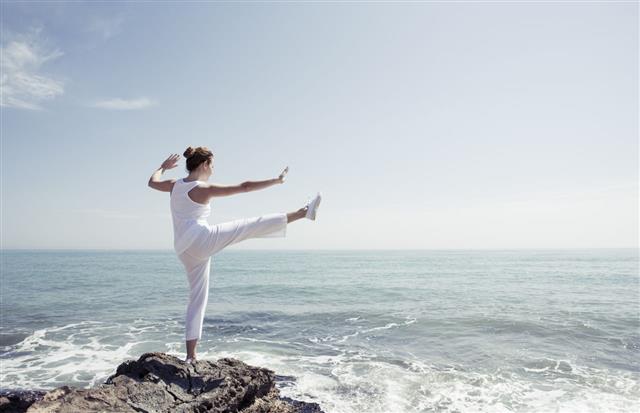 As may be noted, these forms symbolize the use of an extrinsic force against itself, without using much intrinsic energy. The fundamental principle that underlies each of the Tai Chi movements is that of ‘Using softness to defeat hardness’.

While other forms of martial arts go by the theory of learning to suffer to learn hitting, Tai Chi essentially entails learning to hit by learning not to suffer.

Thus, Xian Qi Ran stated:
It is necessary not to lose position, not to lose direction. (to be) effective. (When) the opponent’s control over his center of mass is lost, having ascertained where the flaw is, from which direction to attack, from that place attacking, then can using less strength gain greater success.

The most important attribute of Tai Chi lies, perhaps, in understanding nature―how the elements of nature and the residents in use achieve great strength through seeming effortlessness. Thus, there are Tai Chi forms:

As the names suggest, these movements have all originated from a study of the motions of various animals.

In keeping with the Taoist philosophy, the various Tai Chi forms call upon students to achieve a calm and tranquil mental status in the face of adversity. It, therefore, does not remain a ‘martial’ art―when properly practiced, it is more of a mode of better living through an understanding of oneself.

In today’s world, where life is hectic and fast-paced, practicing Tai Chi can establish some amount of control and relaxation, by preventing the onset of inertia of motion.